Software used to backup and restore settings on a number of compatible router models.
This utility is also able to modify several of the settings held in the files it manages.
It has been downloaded by thousands of users since it's release in 2004.

To compliment the backup utility and to help users on forums to post the key information required to diagnose router-related problems, this tool was developed. It has already helped solve problems for numerous users. This has been updated to cater for the TI AR7 platform of routers.

A tool that allows telnet commands to be scripted easily. Scripts can be written for this tool in a very simple language to provide router tweaks, read settings and check status. This tool is specifically for the TI AR7 platform routers, but since it uses conventional telnet commands it has many other applications.

This small utility applies various 'fixes' to a router's config file - the router must be based on the TI AR7 platform.

A small program which monitors the ADSL line stats of Conexant based routers. Upstream and downstream SNR and attenuation are tracked, graphed and recorded at regular intervals. This allows the user to keep track of any connection drops or line instability, helping to diagnose any faults.

A two part software package for new owners of routers - the setup software helps configure their network and Internet settings whilst the login provides a simple conduit for easy access to the router's setting pages.

Software co-developed with John Latham to help monitor and save the router's log file(s).

The routers sometimes have their firmwares stored in compound files going by the .dlf extension. These DLF files contain a whole gamut of html and code files that go into making the firmware. This manager allows easy decompiling/compiling and viewing of DLF files.
The hard work of deciphering the DLF structure was completed by Prof. Abimbola Olowofoyeku aka thechief. This manager is simply a front-end to his work. 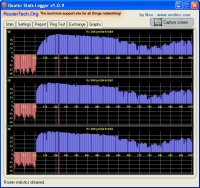 The Router Stats Logger started of as as extension to a similar tool called the "Router Stats Keeper", but it is now a feature rich tool of it's own for the TI AR7 platform. It can ping, trace route, monitor the Internet connection, reboot the router, graph many different aspects and much more...

Other related projects include: